He was all of these. One of snooker’s most popular players, a respected television commentator and much-loved figure, although he had a gambling addiction which left him heavily in debt.

Thorne, who has died aged 66,Â was perhaps recognised for his premature bald head and manicured moustache as much as his break-building prowess.

His soothing tones endeared him to a generation of TV viewers, and he was a popular contestant on Strictly Come Dancing.

In a career that spanned snooker’s boom in the 1980s, he was part of the Matchroom Mob that featured in the surprise 1986 chart hit Snooker Loopy.

Thorne went from top of the pots to Top of the Pops as he played up to Chas and Dave’s line ofÂ “Old Willie Thorne, his hair’s all gorn”Â with the reply: “Perhaps I ought to chalk it!”

Born in Leicester, where he later formed a close friendship with football star and snooker fan Gary Lineker, he was a talented player who reached number seven in the world, although a major title eluded him.

Thorne was haunted by his error in the 1985 UK Championship final against Steve Davis, when 13-8 ahead and on the verge of extending his lead to within two of victory, he missed the simplest of blues off its spot.

He later admitted: “I went back to my seat and the doubts kicked in straight away. I was still 13-9 in front, but all I could think about was the way I’d failed in big games in the past.”

His rise through the snooker ranks was rapid. Having only started playing the game aged 14, within two years he was crowned national under-16 champion.

Swiftly turning professional, he came to be regarded as one of the sport’s finest break builders, earning the nickname Mr Maximum as he became only the third player to secure 100 competitive centuries.

Thorne reached his first of two World Championship quarter-finals in 1982, where he pushed the eventual champion Alex Higgins.

But Thorne was already struggling with a gambling addiction, and journey to the UK semi-finals in 1987 – where he was beaten 9-2 by Davis – represented the last big tournament run.

Thorne revealed the extent of his gambling issues in an interview withÂ the Guardian in 2004,Â recalling an incident in which he placed a bet of Â£38,000 on John Parrott losing a game, because he had lost his cue.

He was commentating on the game for the BBC, and said: “I put Â£38,000 on Parrott to lose because he didn’t have his cue, but he ended up winning the bloody game.

“I’m having to close the commentary by saying it’s unbelievable, spewing up as I say it.”

Thorne, who worked as a BBC commentator for 30 years, later revealed he lost Â£1m to gambling in his career. He was declared bankrupt in 2016.

He remained a familiar figure within the sport and competed in the BBC’s Strictly Come Dancing in 2007 with partner Erin Boag, being voted out in 12th place.

He was married to ex-Miss Great Britain winner Jill Saxby, but they split up after 24 years as his gambling troubles escalated.

A keen Leicester City fan, Thorne announced he was beginning treatment for leukaemia in March 2020.

He died on Wednesday at the age of 66, having being placed into an induced coma in hospital in Spain after suffering respiratory failure.

A Huge shock to see my old friend @TheWillieThorne has died not only a prolific snooker player but also a real character we spent a number of years on different sporting TV programmes the last few years . He will be greatly missed by all that new him 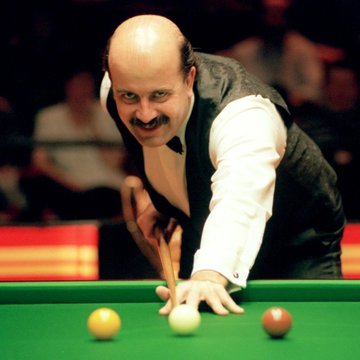 85 people are talking about this
Report

“Willie was one of my favourite people in snooker,” said seven-time world snooker champion Stephen Hendry.

“I know he had faults and weaknesses (we all do) but he was one of the game’s greatest ever characters.”

Dennis Taylor, who famously beat Davis to win the world title in 1985, said: “Devastating news about Willie Thorne. We laughed our way around the world for 45 years.

“RIP Great One. That was my name for him. The Great WT.”