The unwillingness of the top four U.S. banks to lend cash combined with a burst of demand from hedge funds for secured funding could explain a recent spike in U.S. money market rates, the Bank for International Settlements said.

Cash available to banks for short-term funding all but dried up in late September, and interest rates deep in the plumbing of U.S. financial markets climbed into double digits.

That forced the Fed to make an emergency injection of billions of dollars for the first time since the global financial crisis more than a decade ago.

While the exact cause of the squeeze is unclear – with explanations ranging from large withdrawals for quarterly tax payments to a big settlement of a trade in U.S. Treasuries – BIS analysts said the growing reliance on the biggest U.S. banks to keep the repo market functioning may have been a big factor.

Miller Scores In OT To Lift Canucks Past Sabres

The big four banks, which BIS did not name in its report, have become net providers of funds to repo markets as they account for more than half of all Treasuries held by banks in the United States at the Federal Reserve.

The repo market underpins much of the U.S. financial system, helping ensure banks have liquidity to meet their daily operational needs.

In a repo trade, Wall Street firms and banks offer U.S. Treasuries and other high-quality securities as collateral to raise cash, often just overnight, to finance their trading and lending. The next day, borrowers repay the loans plus what is typically a nominal rate of interest and get their bonds back. In other words they repurchase, or repo, the bonds.

The system typically hums along with the interest rate charged on repo deals hovering close to the Fedâ€™s benchmark overnight rate, which it cut on Wednesday to 1.75%-2.00% from 2.00%-2.25%.

But in late September, interest rates shot up to as high as 10% for some overnight loans, more than four times the Fedâ€™s policy rate, raising concerns about the fragility of U.S. dollar funding markets. 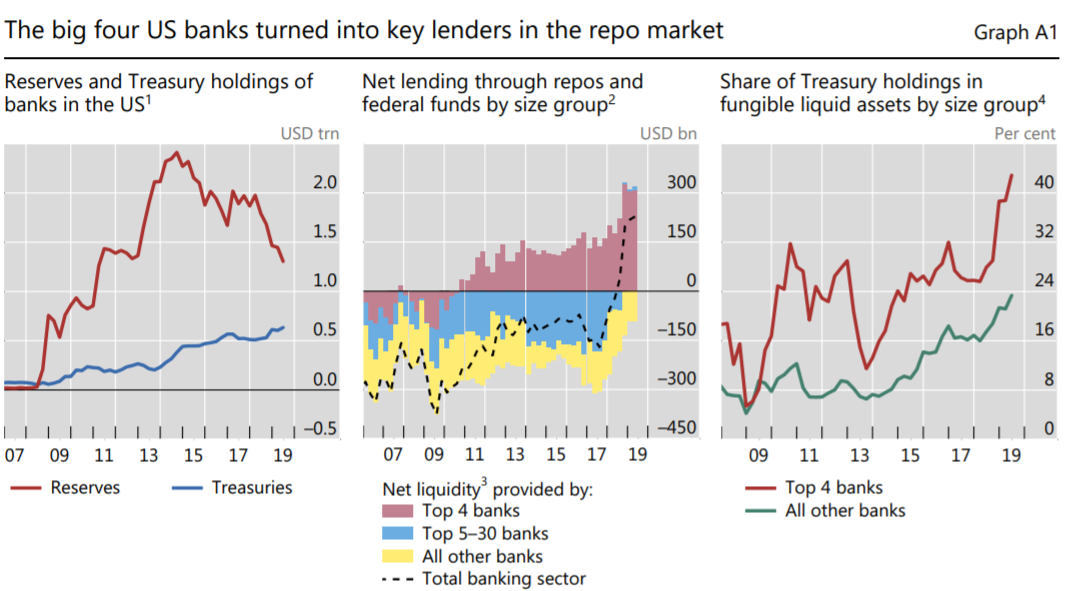 After the U.S. Federal Reserve began to run down its $4 trillion plus balance sheet from October 2017, banksâ€™ cash reserves at the Fed also contracted, while their holdings of U.S. Treasuries grew rapidly, the BIS said.

That reduction in cash holdings at the Fed sped up after the U.S. debt ceiling was suspended in early August.

The Treasury drained more than $120 billion of reserves from Aug. 14 to Sept. 17, reducing the cash buffers of the big four banks and hence their willingness to lend in the repo market, the BIS found.

The repo rate rose to an intraday high of about 700 basis points, with some trades reportedly occurring at up to 10%.

â€œBanks get used to a protracted period of abundant excess reserves, withdrawing them may result in unpredictable and sudden market adjustments. It is as if a muscle had atrophied,â€ he said.

That rush for short-dated secured funding was exacerbated by hedge funds who had ramped up their Treasury repos to fund arbitrage trades between cash bonds and derivatives.

The BIS also noted that the spike in the repo rate spilled over into the currency derivatives market, on which banks rely increasingly for short-term funding.

In the past three years, FX swap volumes have grown to make up as much as 49% of the overall foreign exchange market due to the growing participation of lower-tier banks which depend on swaps for funding as they lack direct access to U.S. dollar markets.

â€œRepo markets, alongside the.. .FX swap market for U.S. dollar funding, may again find themselves in the eye of the storm should financial stress arise at some point,â€ Borio said.