President Trump signed a bill into law Monday establishing animal cruelty as a federal crime after the measure passed with bipartisan support through Congress.

A statement from the White House press office Monday evening confirmed that the president had signed the bill, which specifically codifies so-called “animal crushing” as a federal offense punishable with a fine and up to seven years in prison.

The now-passed Preventing Animal Cruelty and Torture (PACT) law defines the term as any act where an animal “is purposely crushed, burned, drowned, suffocated, impaled, or otherwise subjected to serious bodily injury.”

Speaker Nancy Pelosi (D-Calif.)Â was a vocal supporterÂ of the bill as it passed through the House, tweeting in support of the measure after it had previously passed the Senate with similar bipartisan support.

“Today, I was honored to sign @RepTedDeutch’s #PACTAct to make animal cruelty a federal offense,” she tweeted earlier in November. “Our furry friends, Milo and Prudence, were on hand to help me enroll this bipartisan legislation that will now go to the President’s desk!”

Today, I was honored to sign @RepTedDeutchâ€™s #PACTAct to make animal cruelty a federal offense. Our furry friends, Milo and Prudence, were on hand to help me enroll this bipartisan legislation that will now go to the Presidentâ€™s desk! 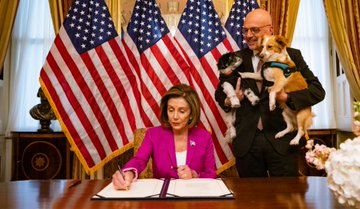 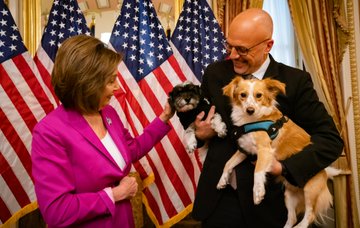 3,607 people are talking about this

The White House also said Monday that Trump had signed into a law an act requiring the Treasury Department to mint coins in honor of the women’s Suffrage movement, which won the right to vote for women in the U.S.