The pop superstar was named Artist of the Decade at the ceremony.

Taylor SwiftÂ was honored as theÂ Artist of the DecadeÂ at the American Music Awards, where she performed a medley of her biggest hits following a licensing dispute withÂ Scooter BraunÂ and former label Big Machine Records.

The singer started off with herÂ LoverÂ cut, â€œThe Man,â€ before launching into songs like â€œBlank Space,â€ â€œLove Story,â€ and â€œI Knew You Were Trouble.â€ Although she didnâ€™t directly address Braun or Big Machine Records, she wore a shirt with all her old album titles written on it. During her acceptance speech, she thanked her new record label for their support without mentioning her longtime home Big Machine.

â€œThis album really felt like a new beginning, and I also really love my record label, Universal and Republic,â€ Swift said. â€œThank you for being so generous to me and allowing me to make whatever music I want to make. As a songwriter, itâ€™s so thrilling to me that I get to keep doing that.â€

The performance aired after a tangled series of conflicting statements. Earlier this month, Swift claimed that Braun and Big Machineâ€™s Scott Borchetta wereÂ blocking her AMAs medley and Netflix documentaryÂ under the premise that she was re-recording pre-LoverÂ material ahead of schedule.

Donâ€™t know what else to do 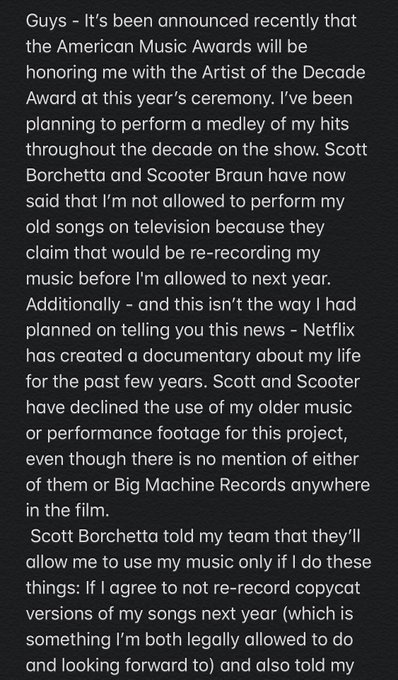 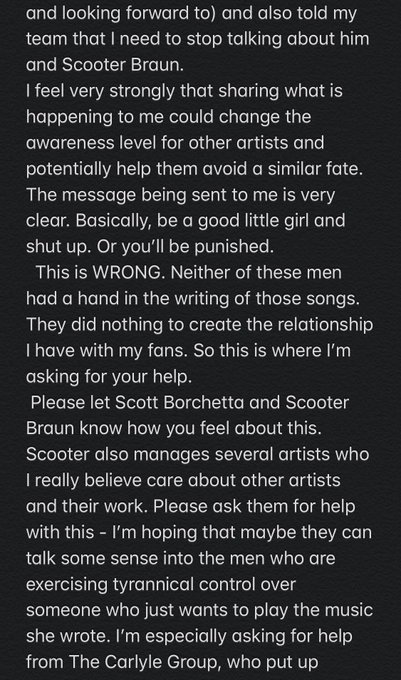 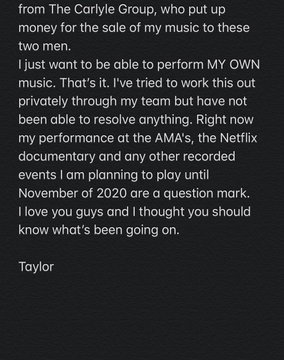 327K people are talking about this

In aÂ blog post, Big Machine hit back against these allegations:

At no point did we say Taylor could not perform on the AMAs or block her Netflix special. In fact, we do not have the right to keep her from performing live anywhere. Since Taylorâ€™s decision to leave Big Machine last fall, we have continued to honor all of her requests to license her catalog to third parties as she promotes her current record in which we do not financially participate.
The truth is, Taylor has admitted to contractually owing millions of dollars and multiple assets to our company, which is responsible for 120 hardworking employees who helped build her career. We have worked diligently to have a conversation about these matters with Taylor and her team to productively move forward.

However, the labelâ€™s initial response didnâ€™t specifically address whether or not Swift would be able to perform her old material at the award ceremony. Big Machine later claimed that they came to an agreement with AMAs producers Dick Clark Productions, but the companyÂ refuted that claimÂ in its own statement. This left the fate of Swiftâ€™s performance up in the air right up to the airing of the show.

Swiftâ€™s latest album,Â Lover, is her first full-length outside of Big Machine, and the first for which she owns her own masters.

Catch up on Taylor Swiftâ€™s biggest hitsÂ on Genius now.