He made his professional debut forÂ Schalke 04Â in 2014 and transferred to Manchester City in 2016 for an initial Â£37 million fee. He was votedÂ PFA Young Player of the YearÂ in 2017â€“18 after helping City win theÂ Premier LeagueÂ andÂ EFL Cup, a feat the side bettered by winning aÂ domestic trebleÂ the following season.

SanÃ© made his senior international debut for Germany in November 2015 and was part of their squad that reached the semi-finals ofÂ UEFA Euro 2016.

SanÃ© was born on 11 January 1996 in Essen, Germany, the son of Senegal international footballerÂ Souleyman SanÃ©Â and German Olympic gymnastÂ Regina Weber. His father met his mother while playing professionally forÂ SG Wattenscheid 09. SanÃ© grew up in Wattenscheid and went to secondary school in nearby Gelsenkirchen. His two brothers, Kim and Sidi,

have played for the youth side or second XI of major German football clubs.

SanÃ© began playing football in 2001 for the youth team of SG Wattenscheid 09. In 2005, he joinedÂ Schalke 04. Three years later, he joinedÂ Bayer Leverkusen, before returning to the Schalke youth academy (Nachwuchsleistungszentrum) in 2011. 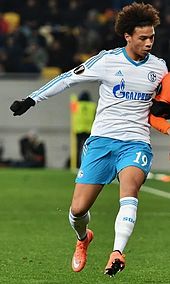 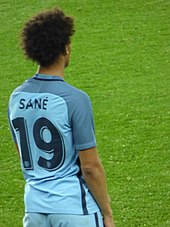 On 2 August 2016, SanÃ© joinedÂ Premier LeagueÂ clubÂ Manchester City, signing a five-year contract for a reported Â£37Â million transfer fee, with performance-related add-ons potentially making the fee Â£46.5Â million.[9][10]Â He made his debut in a 1â€“2 win, in theÂ Manchester derbyÂ againstÂ Manchester United, on 10 September.[11]Â His first goal for

Sunderland.[17]Â On 15 March, he scored in theÂ return fixtureÂ of theÂ UEFA Champions LeagueÂ match againstÂ Monaco, but City lost 1â€“3, knocking them out from the tournament on theÂ away goals rule.[18]Â On 2 April, he scored the opening goal in an eventual 2â€“2 draw with Arsenal.[19]Â On 15 April, he scored in a 3â€“0 win overÂ Southampton.[20]

In July 2017, SanÃ© revealed he believed his debut season at City had been limited by his inability to breathe through his nose.[21]Â He said he particularly suffered during matches, with his constantly blocked nose hampering his performance and causing him intense frustration.[22]Â He opted to have corrective surgery during the off-season break. Although

this caused him to miss that year’sÂ FIFA Confederations Cup, he said his chronic nasal congestion was becoming increasingly unbearable for him and that he wished to enter the next season feeling happy and healthy.[21]

On 15 September 2018, SanÃ© scored the opening goal and his first of theÂ 2018â€“19 seasonÂ in City’s 3â€“0 home win againstÂ Fulham.[42]Â He later scored the final goal in consecutive home match wins over Burnley and Southampton.[43][44]Â On 24 November, SanÃ© assisted a first-half goal for Sterling and scored a brace in a 4â€“0 away win over West Ham United.[45]

On 3 January 2019, he scored the winning goal forÂ Manchester CityÂ in the 72nd minute of the game againstÂ Liverpool, which resulted in Liverpool’s unbeaten run in theÂ English Premier LeagueÂ coming to an end.[46]

On 21 February 2019,Â Manchester CityÂ were 2â€“1 down in the first leg of theÂ UEFA Champions LeagueÂ Round of 16 tie against SanÃ©’s former club, Schalke, playing with only 10 men afterÂ NicolÃ¡s OtamendiÂ was sent off on 68 minutes. SanÃ© levelled the scores with a stunning free kick from just under 30 yards only seven minutes after being substituted forÂ Sergio AgÃ¼ero. He chose not to celebrate out of respect for his former club. City went on to win the game 3â€“2 with the winning goal scored byÂ Raheem Sterling.[47]

On 13 March 2019, in the second leg of theÂ UEFA Champions LeagueÂ Round of 16 clash against Schalke, SanÃ© put in an incredible performance with three assists and a goal to contribute toÂ Manchester City‘s 7â€“0 victory against his former club, sending City to the quarter-finals of the competition.[48]

On 24 April 2019, SanÃ© scored the second and final goal in a match againstÂ Manchester UnitedÂ during the 66thÂ minute to secure City aÂ Manchester derbyÂ win.[49]Â It was his first ever Manchester derby goal.[50][51][52]

SanÃ© was repeatedly linked withÂ BundesligaÂ championsÂ Bayern MunichÂ to replace club staplesÂ Franck RibÃ©ry, who was leaving the club, and retiringÂ Arjen Robben.[53]Â Despite a deal to the German side reportedly being nearly finalized, SanÃ© was surprisingly named in the starting 11 againstÂ LiverpoolÂ in theÂ FA Community Shield. After only 10 minutes, SanÃ© was substituted after sustaining a torn ACL, ruling him out of competition for the majority of the season and ending talks with Bayern until his injury healed.[citation needed]Â However, City are keen to keep SanÃ© contracted to the club, hence have kept their contract offer on the table.[54]

SanÃ© was first called up to theÂ Germany under-21 teamÂ by youth coachÂ Horst HrubeschÂ on 28 August 2015 for the friendly against Denmark and for theÂ 2017 UEFA European Under-21 ChampionshipÂ qualifier againstÂ Azerbaijan.[55]Â On 3 September 2015, he made his debut for the German U21 side in a 2â€“1 win atÂ Stadion an der LohmÃ¼hleÂ inÂ LÃ¼beckÂ againstÂ Denmark, where he was replaced after 73 minutes byÂ Julian Brandt.[56]

SanÃ© playing for the Germany youth side in October 2016.

SanÃ© received his first senior call-up to theÂ German senior teamÂ on 6 November 2015 in a friendly againstÂ France.[57]Â On 13 November 2015, he was substituted in the 61st-minute forÂ Julian DraxlerÂ in a friendly match against France inÂ Saint-Denis, in what would be a 2â€“0 defeat for the Germans, overshadowed byÂ shootings and explosions around the stadium.[58]

SanÃ© was eligible to play for France because he holdsÂ French citizenship.[61]

SanÃ© was omitted from Germany’s final 23-man squad for theÂ 2018 FIFA World CupÂ in favour of another young playerÂ Julian BrandtÂ on 4 June 2018.[62]Â In September 2018, after he was selected for the squad to face games against France and Peru, he left the team hotel after a discussion withÂ Joachim LÃ¶w, citing “personal reasons” as his cause for leaving.[63]Â It was later revealed that the reason for leaving was due to the birth of his daughter.[64][65]

On 16 November 2018 he scored his first goal for Germany againstÂ RussiaÂ following an assist fromÂ Serge Gnabry. The goal came in the eighth minute of the game as Germany won 3â€“0.[66]