Thousands of shoppers have queued for hours to get into Ikea stores after the furniture giant reopened 19 shops in England and Northern Ireland on Monday.

They had been warned that only a limited number of shoppers would be welcomed with only one adult and one child from a household allowed in.

But Ikea was forced to shut car parks at some stores to help ease pressure.

In Warrington, people arrived at 05:40 to start queuing for the Ikea store to reopen at 09;00.

The company praised shoppers for their patience.

“We’re incredibly grateful to the public in playing their part to help keep everyone safe.”

Queues across the country

In Warrington, a line of more than 1,000 people snaked around the car park with similar scenes at Ikea’s Wembley store.

On Twitter, shoppers complained of “five-mile queues” in Croydon, Wembley and outside of London.

If you’re in the 5 mile queue for IKEA then you’re crazy (it goes past Nando’s and loops around the car park!) 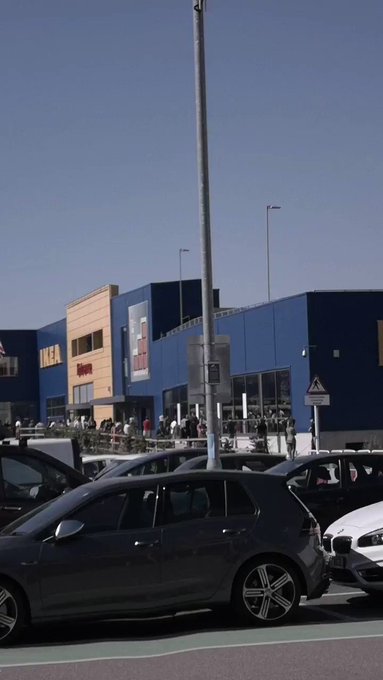 32 people are talking about this
Report

Law student Alexi Norris visited Wembley to buy a desk but was shocked at the long waits.

The queue for IKEA Wembley today?! I only wanted to get a desk to finish my exams on. What on Earth do this many people need?!?!?!

“It’s very busy with every entrance manned by staff with walkie talkies who were managing the long queues that had formed,” the shopper said.

“We arrived just after 11:00 and had to queue for about an hour and a half before we were allowed into the store.

“However, once inside though the store was much emptier than usual, so it was very easy to stay a safe distance from the other shoppers.”

But some criticized the long queues as a sign of runaway consumerism.

One Twitter user said: “Don’t understand how a person sees this Ikea queue and actually joins it, rather thanâ€¦ heading home for a beer.”

One said: “People shopping at Ikea moaning about the people in the queue at Ikea today. It’s the ‘it’s not me, it’s everyone else’ attitude that will cause the inevitable second wave.

“Wear a mask and only go out if you have to. It’s not that hard, surely?”

An Ikea spokesperson said: “The health and safety of our customers and co-workers remains our top priority, which is why we put extensive and enhanced measures in place to create a safe and comfortable experience.”

The measures include limiting numbers of customers in stores, a staggered entry system, screens in key areas and social-distancing wardens. All play areas and the restaurants have remained closed.

“We ask that these measures are respected at all times,” Ikea said.

It had asked customers to “come prepared with ready-made lists and their own bags to help ease waiting times”. It also pleaded with customers wishing to return items, “to do so at a later date”.

“While frustrating, these planned measures are in place to ensure everyone’s safety,” Ikea said.

“To avoid queues, we’d ask those purely wishing to browse, to visit us in the coming weeks.”

Meanwhile, new footfall data from retail analyst Springboard has shown a sharp rise in the number of shoppers as a result of lockdown restrictions in England being eased.

The increases have come despite only limited reopening allowed in England.

Scotland, Northern Ireland and Wales have not yet allowed similar shops to open again.