And so the curtain prepares to come down on the 2019 F1 season under the floodlights of the Yas Marina Circuit in Abu Dhabi.

After a thrillingÂ Brazilian Grand Prix,Â which saw Red Bull’s Max Verstappen twice pass world champion Lewis Hamilton on his way to victory, the drivers are again racing for pride with the title long since wrapped up by the British Mercedes driver.

Restoring pride is very much on Ferrari’s agenda after the nightmare collision between Sebastian Vettel and Charles Leclerc at Interlagos, with the Scuderia desperate to put on a united front before the end credits roll.

Elsewhere, the traditional end-of-season goodbyes will be in full swing, with Renault’s Nico Hulkenberg among those bidding farewell.

Hulkenberg is without a seat for next year, and with only one 2020 drive to be filled – Williams have yet to replace the departing Robert Kubica – it seems likely the German’s 10-year F1 career is at an end, for now at least.

Abu Dhabi arrived on the calendar in 2009 and took over as the season finale from the much-loved Interlagos.

Expats and fans from all over Europe flock to this sunny destination for a blast of some much-needed winter vitamin D. The facilities are as flash and futuristic as you’d expect, given the bottomless pit of money that was made available for its construction.

The Hermann Tilke-designed track is surrounded by seven hotels, Michelin-starred restaurants and Monaco-style mega yachts in the marina of Yas Island.

A bonding session between Vettel and Leclerc could also be perfectly accommodated at Ferrari World Abu Dhabi. The mostly indoor amusement park is a Scuderia supporter’s dream and is home to Formula Rossa, the world’s fastest rollercoaster.

The circuit itself is camera-ready pristine, with a manicured backdrop of twinkling lights and picturesque palm trees. Lights out at dusk means plenty of atmospheric shots of drivers racing off into the sunset.

In 2013 the event even coincided with a partial solar eclipse to add a bit more visual drama to the proceedings.

Two long straights, a minor elevation point and 21 nondescript turns leave a slight sterile feel to the season finale. The best chance of an overtake – and hopefully some Brazilian-style driver contact – is into Turns Eight and 11.

Abu Dhabi has witnessed a few heart-stopping moments. Hulkenberg emerged unhurt from a frightening-looking accident in which he was pitched into a roll and landed upside down in a first-lap clash with Romain Grosjean’s Haas 12 months ago.

Hulkenberg sounded frantic as he came over the team over to say: “I’m hanging here like a cow. Get me out. There’s fire.” The marshals were quick to react and the German was able to climb out unaided.

Yas Marina probably isn’t a circuit that is going to provide the unfamiliar faces on the podium like the Brazilian Grand Prix did two weeks ago.

Hamilton has won four times in Abu Dhabi – three with Mercedes and once for McLaren – while Mercedes as constructors have taken five victories.

Hamilton dominated last year’s race from pole with a controlled drive to end 2018 with 11 victories.

The Briton can repeat the achievement again this weekend if he takes the chequered flag for the first time since the Mexican Grand Prix in October.

Hamilton’s team-mate Valtteri Bottas celebrated an impressive victory from the front of the grid in 2017, holding off the threat of Hamilton to record Mercedes’ third one-two finish at in a row at Yas Marina.

However, the Finn may have to take a grid penalty in Abu Dhabi if his car needs a new engine following his retirement at Interlagos.

order of the season! #Fit4F1 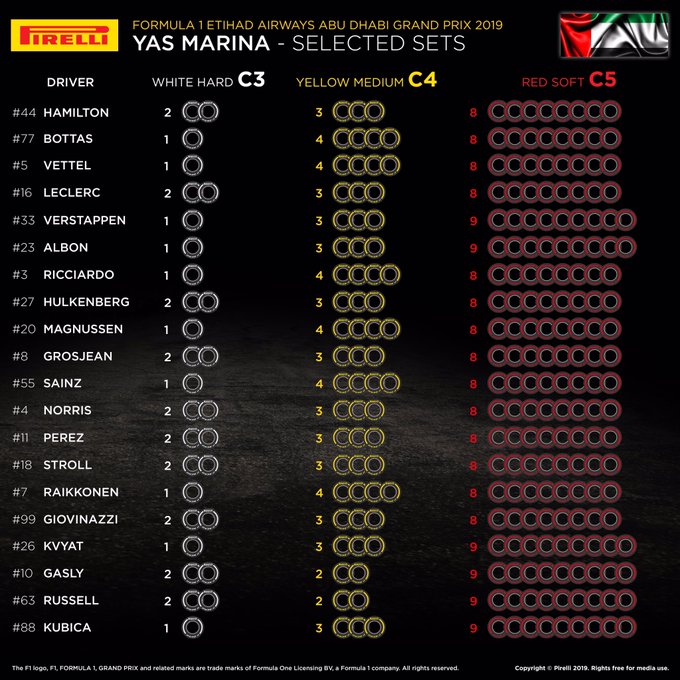 165 people are talking about this
Report

Andrew Shovlin, Mercedes’ trackside engineering director, explained what happened to Bottas’ car in a Twitter Q&A: “When you started to see the smoke, the rate at which the oil was being consumed increased and eventually the car actually switched itself off.

“That power unit has come back to Brixworth, they are going to be looking at it and will be making an assessment of whether there has actually been any damage and whether or not we will need to take a penalty.”

In 10 years of racing in the United Arab Emirates, Ferrari have never recorded a win at Yas Marina. Vettel is just one behind Hamilton with three victories at the track but of all them came during his multiple title-winning period with Red Bull.

The German took the inaugural win here in 2009, then sealed his maiden F1 championship twelve months later with a memorable display that saw the then 23-year-old start the day in third place in the drivers’ standings.

Vettel has at least enjoyed podium success in the UAE with Ferrari, including a second-placed finish last year and consecutive third-placed finishes in 2016 and 2017.

For one last time this year, we say these magical words… 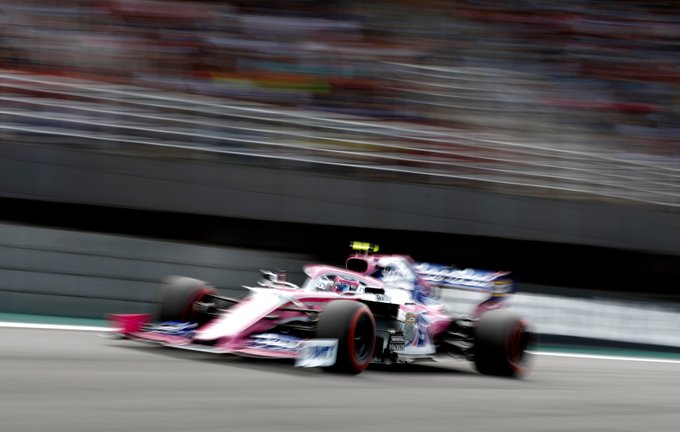 219 people are talking about this